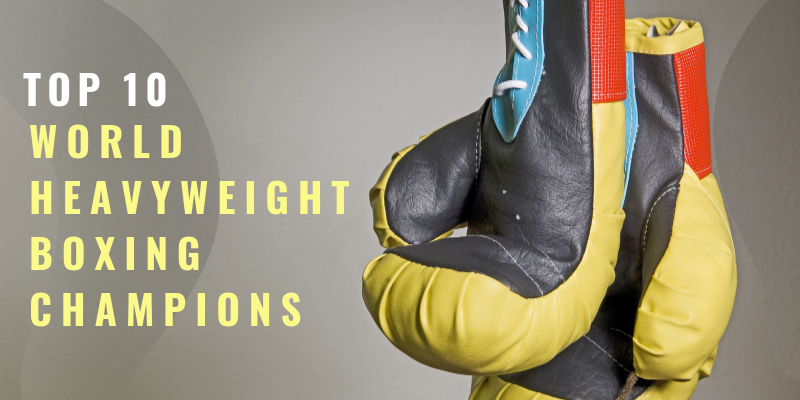 Boxing is never been just knocking outs your opponents, but its all about proving yourself the best.

If you are a die-hard boxing fans you would always consider the top 10 heavyweight boxing champions as real life heroes because they didn’t get the champion tag in charity, they earned it with hard work, pain and persistence.

Let’s discuss Top 10 Heavyweights Boxing Champions of All Time who despite struggle in their early childhood, stood up, broke records, set new milestones, and created history.

Muhammad Ali was born in Kentucky, in a situation where money was scarce and luxuries few. His parents were not highly educated as his father did a number of odd jobs like painting signs and his mother was a cleaning lady.

In 1960, he participated in the Olympic Games held in Rome and won a gold medal at the age of 18 in the light heavyweight section. He signed one of the biggest contracts with the Louisville Sponsors Group.

He was also popular with the nickname ‘Louisville Lip.’

The boxer saw a lot of trauma at a very sensitive age. His family made barely enough for the essentials of livelihood. When he was 2, his father was put in a mental asylum. He developed a shy nature and a stammer because of lack of proper education and interaction with his peers.

It was only in 1934 that Joe Louis won the Golden Gloves light heavyweight title, open class category at Detroit, and soon after, the Amateur Athletic Union Championship.

He won a total of 54 games, in which he won 43 by a hands-down knockout. He also defeated Braddock for the Heavyweight Title in 1937.

When Joe Louis died in 1981, his net worth was estimated at around fifty million dollars.

John Arthur Johnson was born to parents who were slaves. He was the third child in a family of nine children and had to go to work as a labourer without completing his studies in order to support his family.

He possessed a great deal of drive, and at the age of 16, he went to New York and Boston with the hopes of starting a new life.

Johnson first started boxing at the age of 16 in order to earn money from the fights. However, his talent was recognised, and he soon became renowned in the black boxing circuit. He wanted to challenge the white boxing champion, Jim Jeffries who owned the title of the World Heavyweight.

Later, the title passed on to Tommy Burns, who later accepted Johnson’s challenge. The fight went on for 14 rounds with no clear winner till the police stepped in, and declared Johnson the winner.

Jack Johnson has a net worth of twenty four million dollars.

Jack Dempsey was born in Colorado and was the youngest in a large family which had seen very tough times due to his father’s unemployment. Due to the family’s economic struggle, he had to quit school at the age of 8, and work on a farmer’s field and tend crops.

On 15th August 1919, Dempsey got his chance to fight the world heavyweight champion, Jess Willard. Dempsey weighed 187 pounds, and his formidable opponent weighed 245 pounds. No one expected Dempsey to win, but he managed to knock Willard out in the third round.

He held on to the title for the next five years, which is considered to be laudable and commendable.

Jack Dempsey’s net worth is estimated to be to the tune of twelve million dollars.

He dropped out of school at the age of 15 in Houston and began following an unfavourable lifestyle soon after. He was in touch with job corps and moved to California soon after.

In 1969, Foreman fought against Donald Walheim in a debut round in professional boxing. In 1973, Foreman won the heavyweight title by defeating Joe Frazier. Joe Frazier was knocked down six times by Foreman, despite having been undefeated before.

Foreman also defended his title by defeating Ken Norton in a very famous showdown. In 1974, Muhammad Ali beat Foreman in the Rumble in the Jungle round in Zaire, Congo. He lost the legendary match because of a cut he sustained during training.

George Foreman’s net worth in 2020 is three hundred million dollars.

Joe Frazier was the 12th child of his parents. He was born in South California. After a quarrel with a farm owner, it became clear to him that he had no means to survive in Beaufort.

In New York, he took to stealing cars because of lack of means of employment. Then he moved to Philadelphia, where punching beef led him to realize his passion and ability for boxing.

In 1961, Frazier caught the eye of Durham, who honed the talent of the rough and unpolished young boxer. He won the title of the Middle Atlantic Golden Gloves Champion, which was not a mean feat to achieve, for three straight years in a row.

Joe Frazier had a net worth of a hundred thousand dollars at the time of his death in 2011.

Larry Holmes was born in Georgia, but his parents separated when he was seven, and he lived with his mother in Pennsylvania, because of which he got the nickname- Easton Assasin. He was 13, but he had to quit school due to lack of money.

Larry Holmes was a street fighter in his youth, and won 19 of the 22 fights he was in. He turned a professional at the age of 24, and fought both Muhammad Ali and Joe Frazier at some point in his career.

He defeated Ken Norton, and took over the title of the heavyweight crown of the World Boxing Council. He was successful in defending his title around 17 times over the course of the next few years.

He also entered a fight against Ali, whom he called his mentor, and was forced to defeat the latter to claim the title of the world heavyweight champion.

Evander Holyfield was born in Alabama with eight siblings, and was raised by a single mother. He shifted to Atlanta and grew up there.

He was supposed to participate in the Junior Olympics in Los Angeles, but got disqualified because he hit his opponent Kevin Barry post the break. By 1984, Holyfield became a professional boxer and defeated a few prominent names in the world of boxing like the Mike brothers, and Terry Mims. Holyfield wanted to win the heavyweight title from Mike Tyson but could not do so as the latter lost to Jame Douglas. Holyfield then took the title from Douglas.

Evander Holyfield has a net worth of one million dollars in today’s times.

Rocky Marciano was born in Brockton, Massachusetts. He dropped out of school and then began doing a number of odd jobs like – the position of a sweeper for the floors of Brockton shoe factory. He joined the army in 1943.

In 1946, the boxer won the Amateur Armed Forces tournament. In 1947, he fought as a professional and knocked out his opponent Lee Epperson in three rounds itself. He tried to qualify for the Chicago baseball team, but did not succeed.

So, he made his way back to Brockton, and took up boxing again. In 1952, Marciano fought Walcott to wrest the title of world heavyweight champion from him.

Marciano was behind Walcott for the first seven rounds or so. However, he made a comeback in the 13th round and won.

When he died in 1969, Rocky Marciano had a net worth of 1 million dollars.

Mike Tyson was born in Brooklyn, but his father ran away two years after he was born. By the time he was 13, he was proficient in streetfighting and had been in jail for various small crimes. Bobby Stewart discovered his talent at Tyron School, and then introduced him to Cus D’Amato, Tyson’s guiding light to a successful career in boxing.

He won two consecutive gold medals at the Junior Olympic Championships in the year 1981, and 1982. However, he started making his name in the game when 1985 when he knocked out Hector Mercedes in round one itself. In 1988, he made a record by defeating the renowned Michael Spinks, in a thrilling 91 second knockout within the first round itself.

Mike Tyson’s net worth is considered to be roughly 3 million dollars today.

This is a list of the top ten heavyweights boxing champions of the world. Their struggle symbolises the effort it takes to reach success, as well as the positive and negative effects of traumatic childhoods on human beings.

The world of boxing shows that the titles are but temporary and win and loss in sports is common and does not determine the ability of the player.